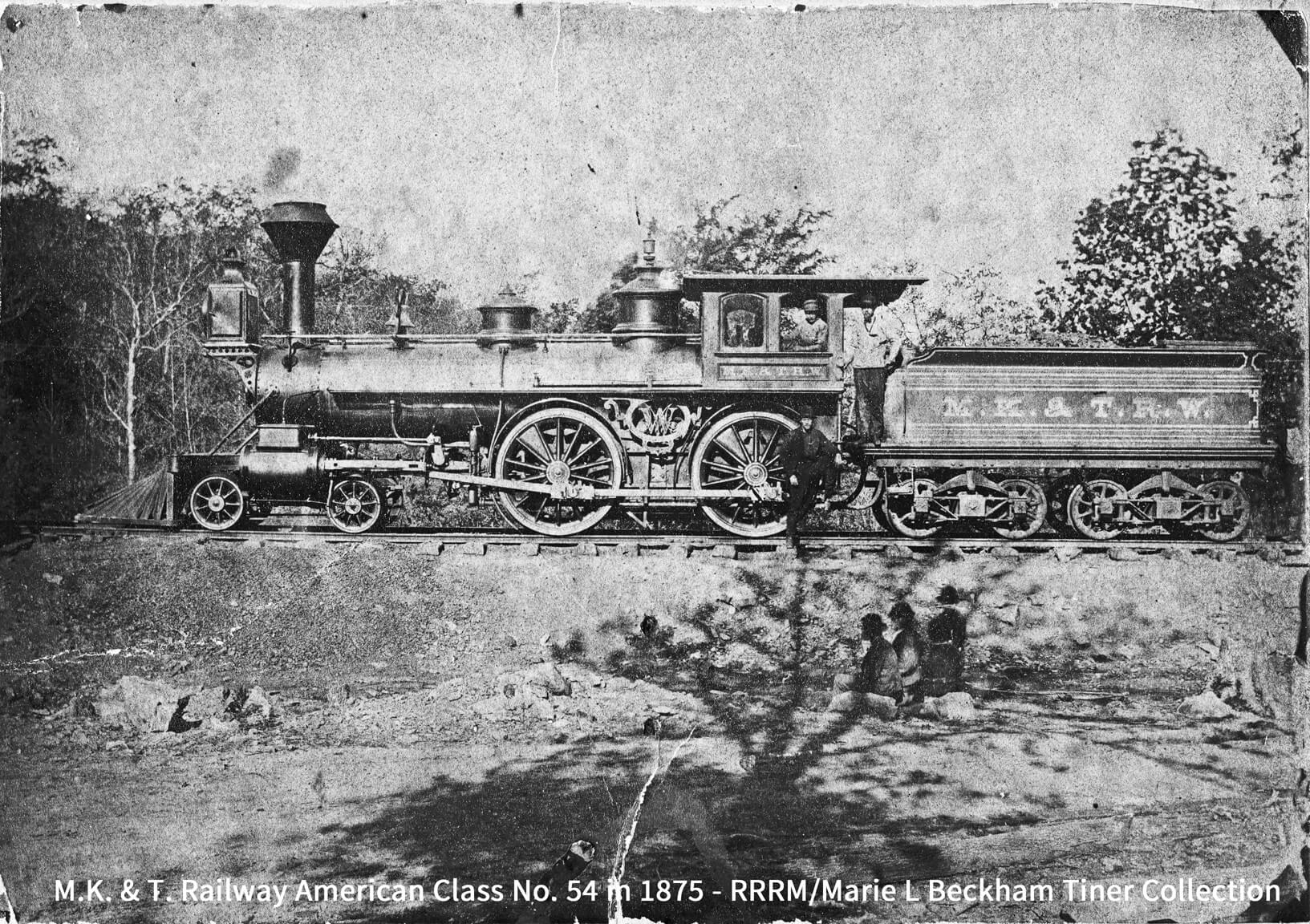 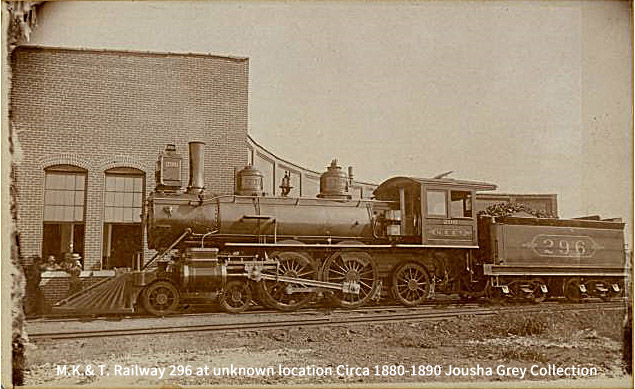 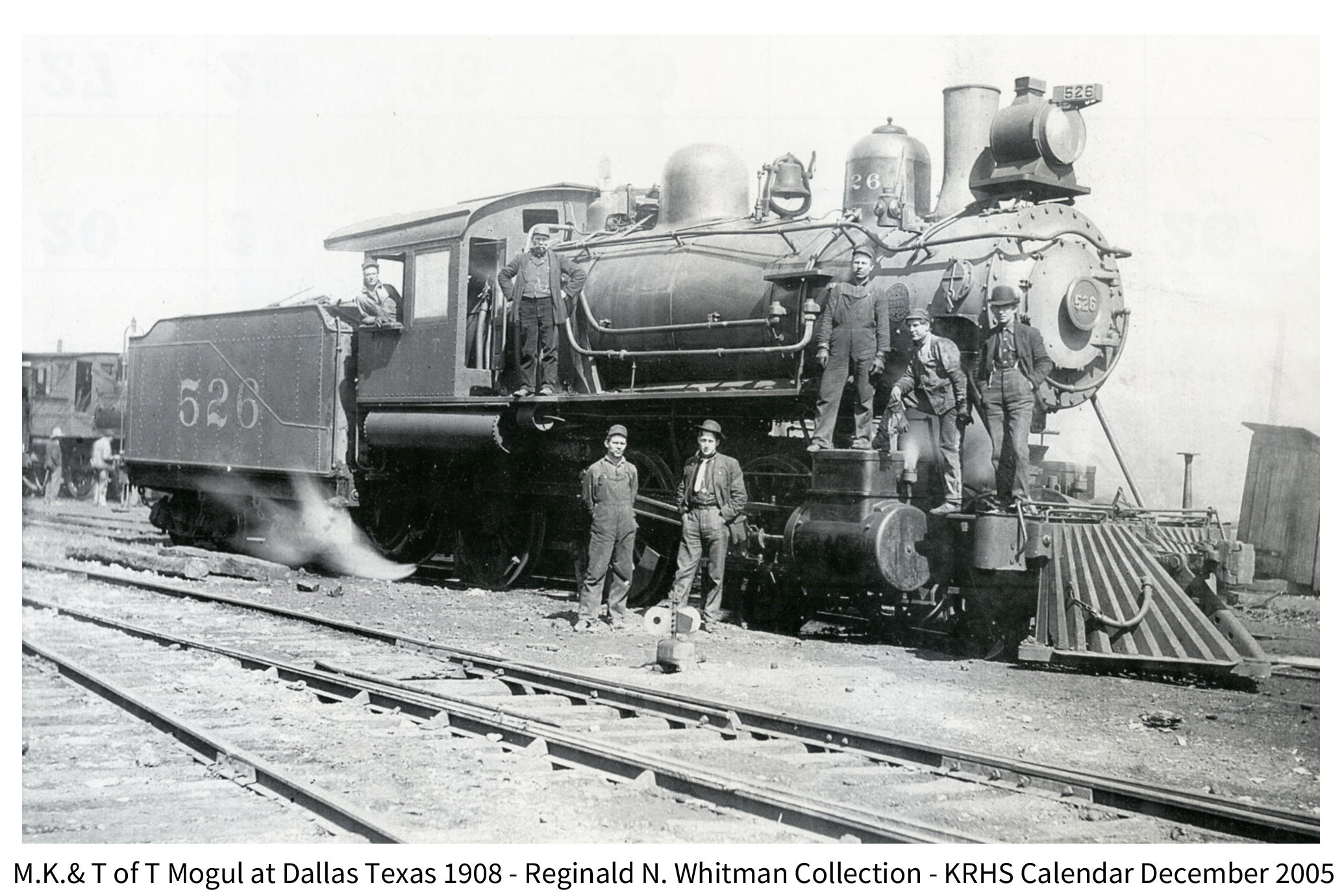 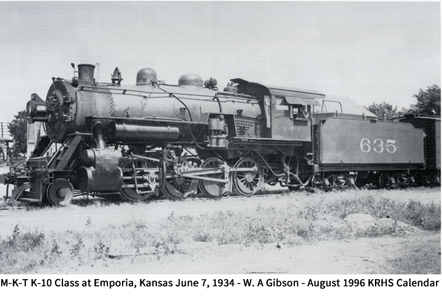 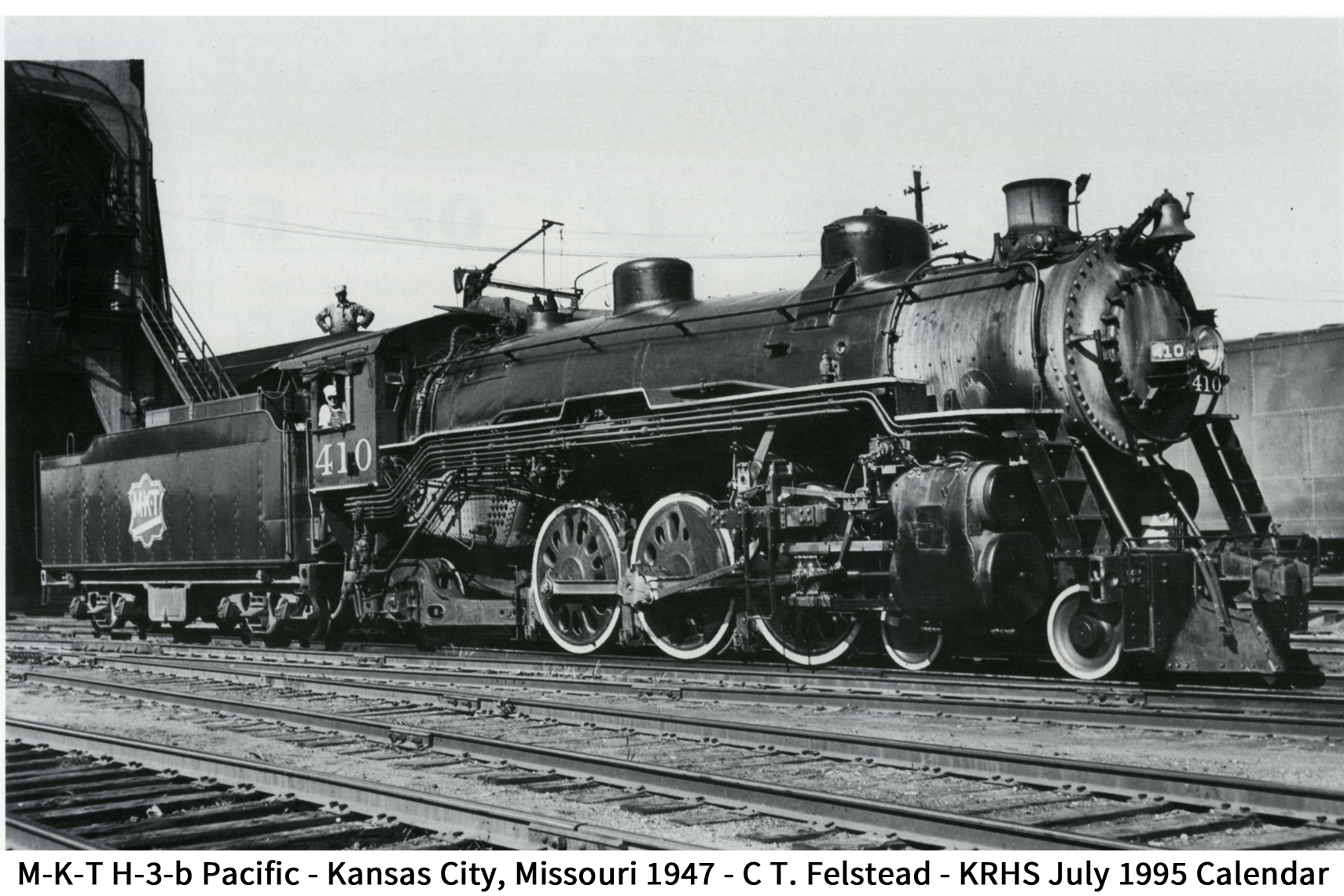 When the Katy started building it’s line to the Gulf of Mexico in Texas in 1870 the early engines were typical for the time period. Mostly diamond stack 4-4-0 American types with a few 2-6-0 Moguls on the roster. According to photos and interviews with long time employees these engines had a polished boiler jacket, probably Russian Iron green or dark maroon with a dark graphite smoke box, stack and glossy black cab. All passenger engines were finished in gold lettering and striping.A large oval medallion on the side and back of the tender, with a field of Chinese vermillion and company initials M. K. & T. R. W. inside of the oval and on the side of the crew cab. The number of the engine in the center of a field of gold, black shaded and split on the rear of the tender of the tender.

The Katy began with the 4-4-0 American Type as did most other railroads. The road may have been the only class 1 line to begin and end the steam era with the 4-4-0 American type on the engine roster. Katy number 311 was loaned to the St. Louis Museum of Transport in the 1950’s and is the only Katy steam engine to escape the scrappers torch. The Katy engine roster showed mostly small and medium engine types during the steam era and included some of the first 4-4-2 Atlantic types in the country. Ten 2-10-0 Russian Decapod types were assigned to the Katy during WWI but no known photos exist of these engines in service. All would leave for other railroads with engine number 8010 going to the Frisco and renumbered 1623. A few narrow gauge road engines appeared on the Katy roster for a short period when the East Line and Red River R.R. was purchased in 1881, this line was converted to standard gauge a short time later. The 2-6-0 Mogul type was most favored in numbers, the engines from Grant Locomotive Works were on the roster in 1873 with engine number 508 the last steam engine used in service on the Katy after more than 50 years of service when removed from the engine roster in 1954. After Jay Gould gained control of the Katy around 1880 the colorful livery disappeared and all engines were painted black with all lettering and numbers appearing to be white. The company name M. K. & T. is moved below the window of the crew cab along with the engine number. The engine number in large numerals is painted on the tender sides and small engine numbers on the sand dome. The engine number of the side of the cab would be replaced later with the engine classification.

After the company reorganization during 1922 – 1923 the company name below the cab side window was changed to M-K-T. Some engines based south of the Red River in Texas were lettered M-K-T of Texas due to a state law requiring railroads operating in the state to be headquartered in Texas. Although the exact date is unknown, around 1930 photographs show some engines with the bottom edge of the tender tank, running boards edges and all wheels trimmed with white paint.

The Katy never had the most powerful or the largest roster of steam engines. But they were always clean, trim and well maintained. The running boards and wheels trimmed in white and appearance standards that were maintained till the final days of the iron horse. The trademark red and white M-K-T enameled steel herald on the engine tenders made Katy steam power stand out from all others. The December 1989 issue of the Katy Flyer featured an article by Ray George titled, The Official Guide To Painting Katy Locomotives, Circa 1945. This article mentions a painting standard guide issued in 1928 with reissues in 1940, 1943 and 1946. A photograph and caption on page 196 in the M-K-T Employees Magazine from July 1928 listed Katy Pacific Type locomotive 397 as the first to have the Katy emblem painted on the tender and engine number below the crew cab window in April of 1928. Later emblems would be enameled steel and bolted to the tender. Later all locomotives would receive the famous Katy herald, photographs in the employee magazine from November 1939 show Mikado Type 861 and 857 the first freight engines receiving the upgrades in Parsons and Bellmead engine shops late October or November of 1939. Photographs show a bright silver graphite smoke box door, smoke box and stack on most engines with the M-K-T herald. The same bright graphite also appears on the exposed surfaces of the backhead, wrapper and throat sheet. Many engines before this period appear to have dark silver graphite applied to the same areas listed above. Check out these links to pages for photos and text information on Diesel Locomotives, Passenger Service, Rolling Stock and Modeling the Katy Railroad.

KRHS Katy Flyer Magazines and Calendars feature many rare and historic photographs of the Katy Railroad that are great for collecting and research. 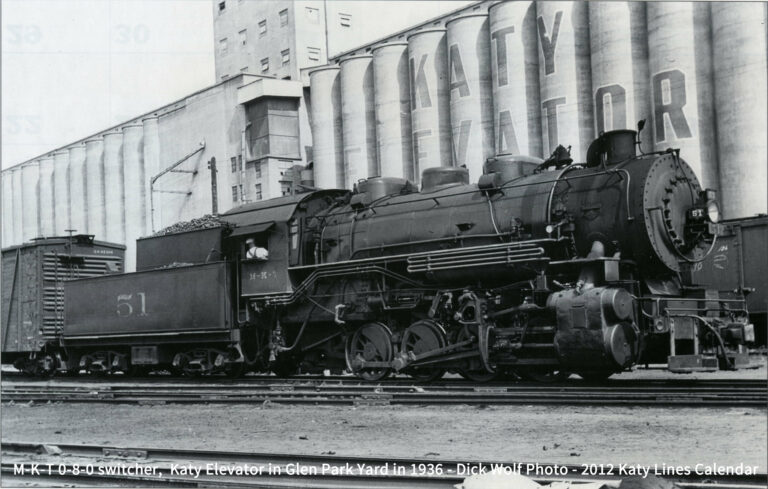 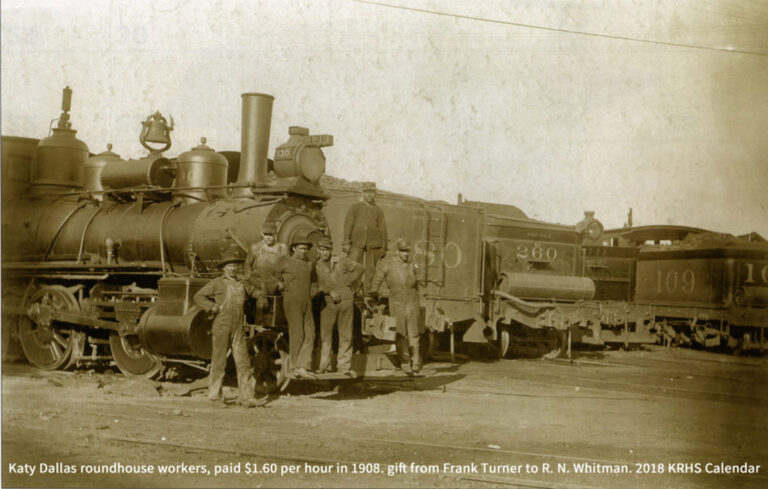 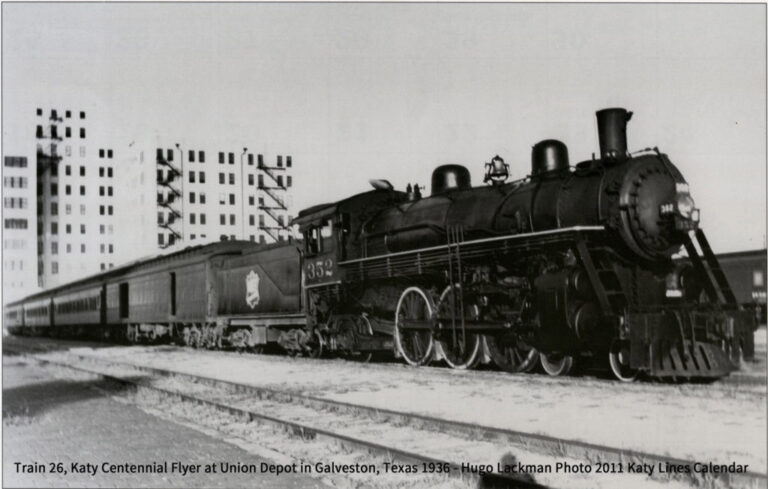 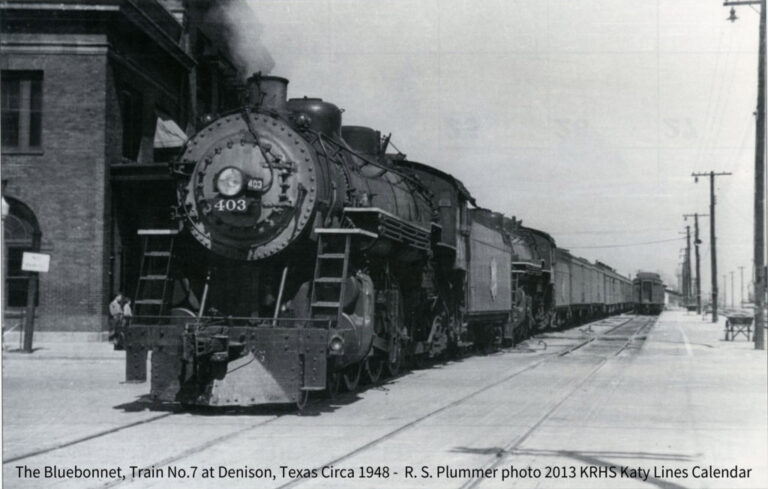 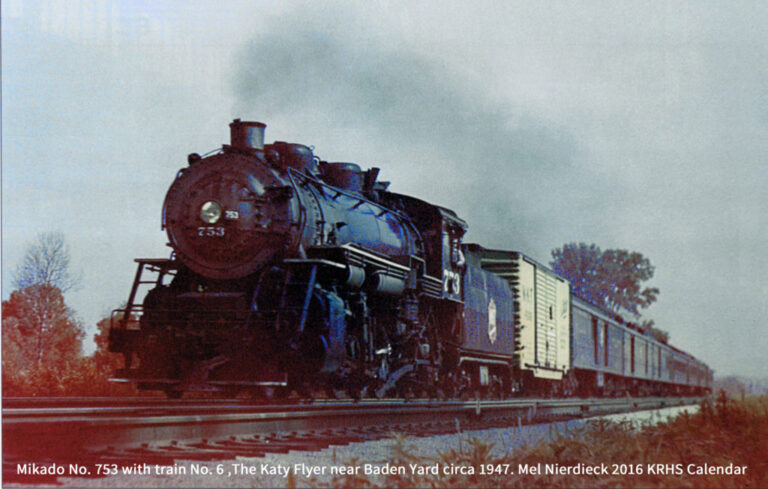 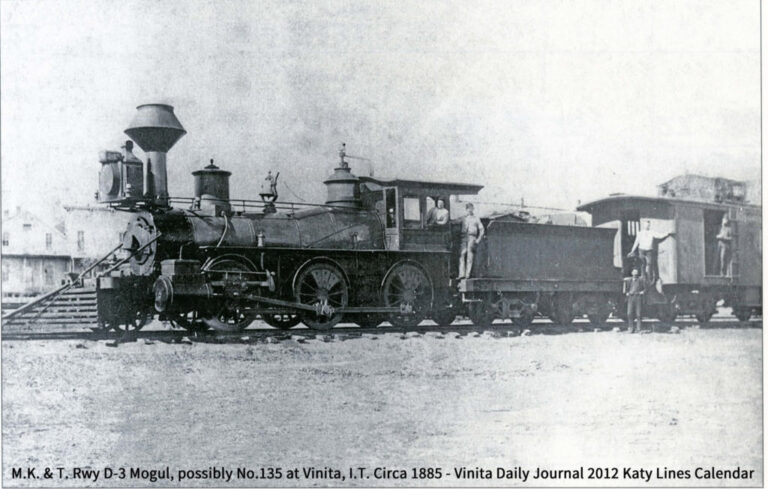