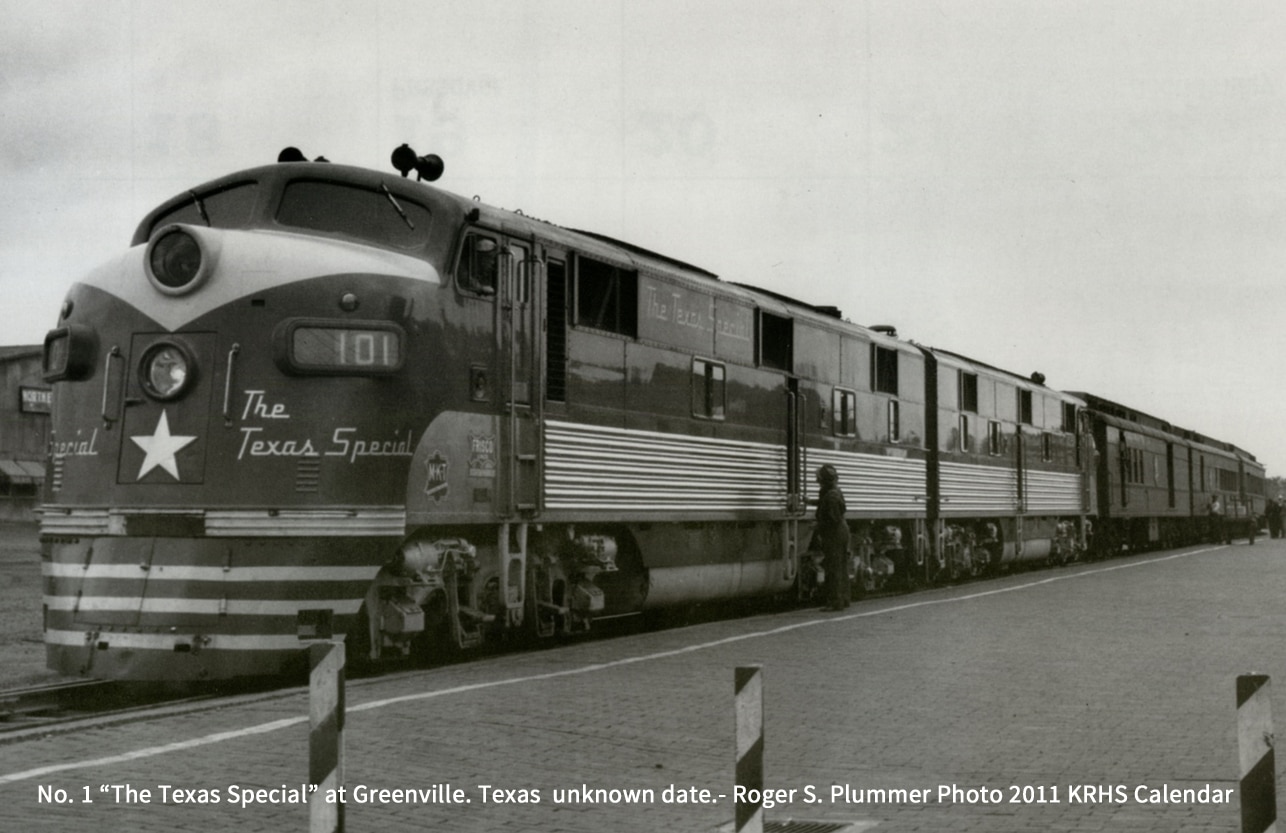 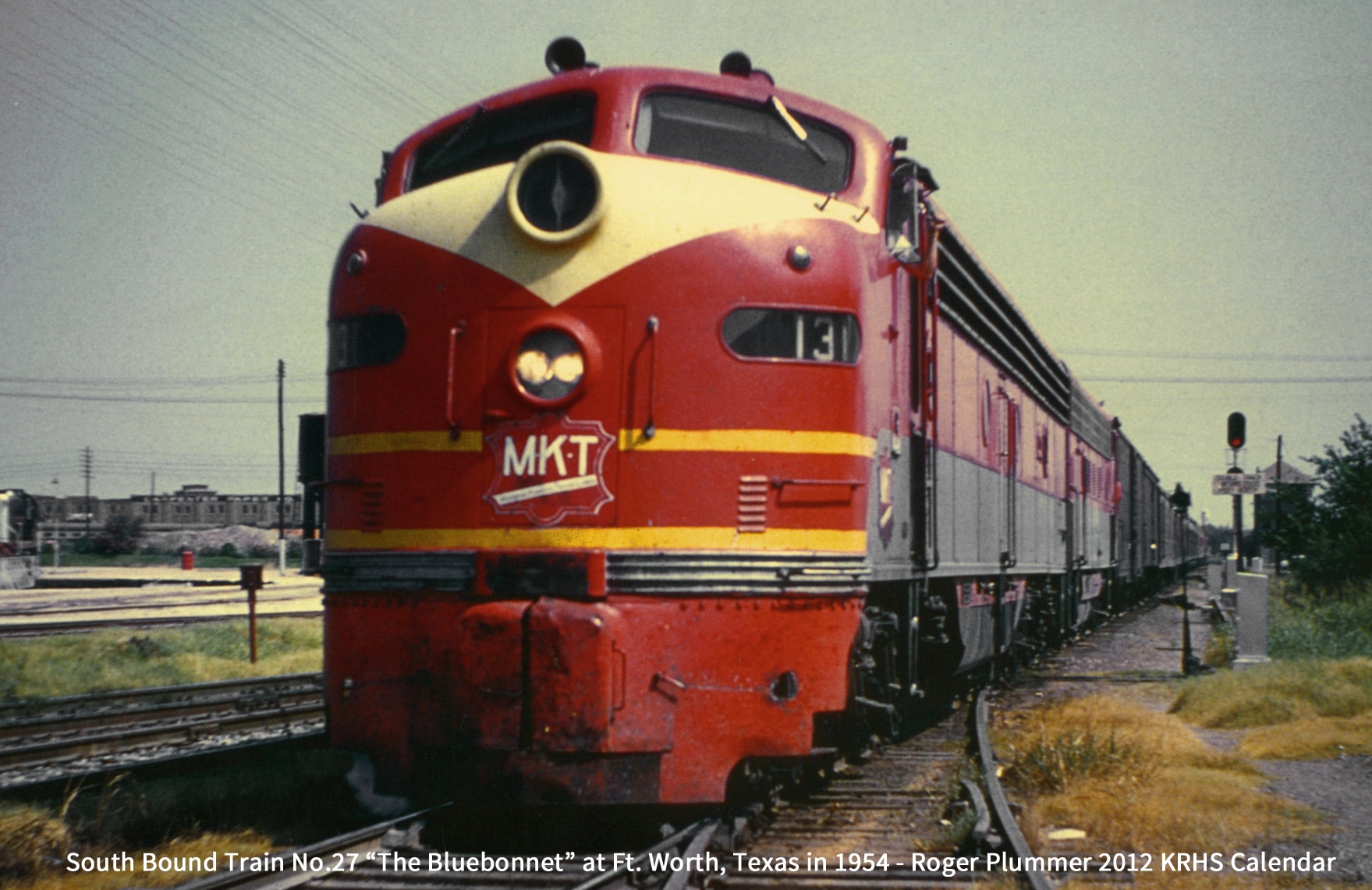 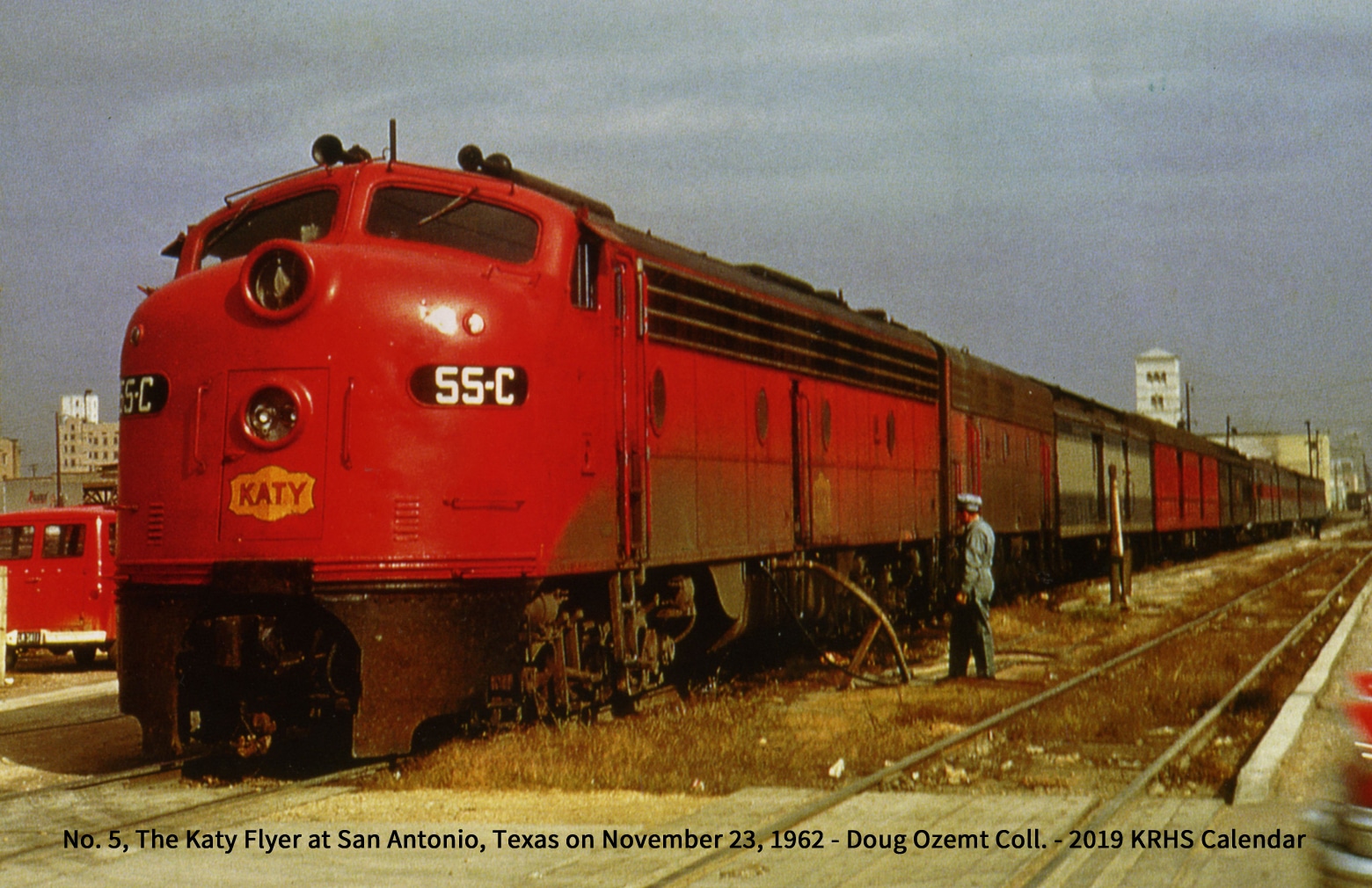 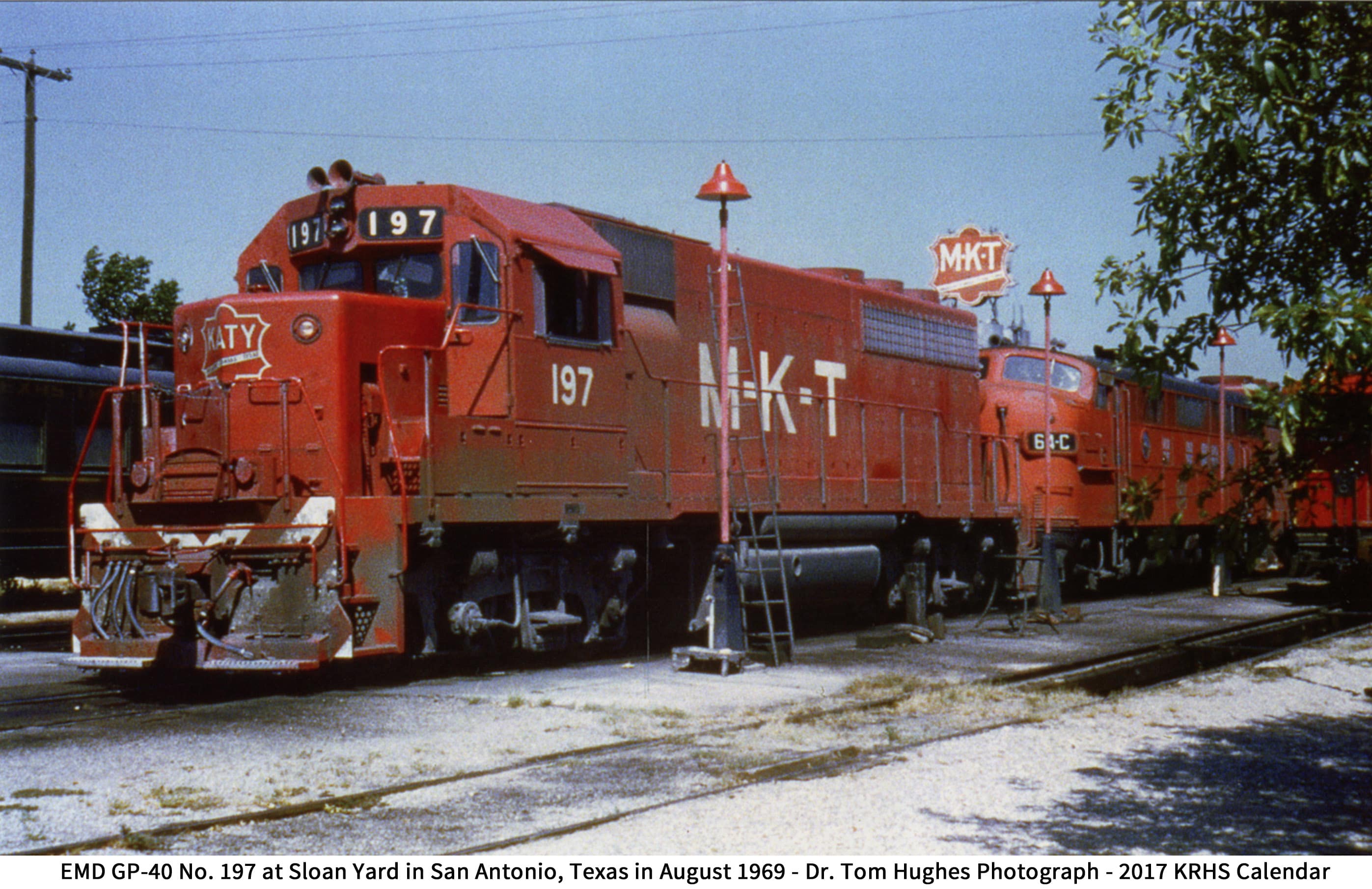 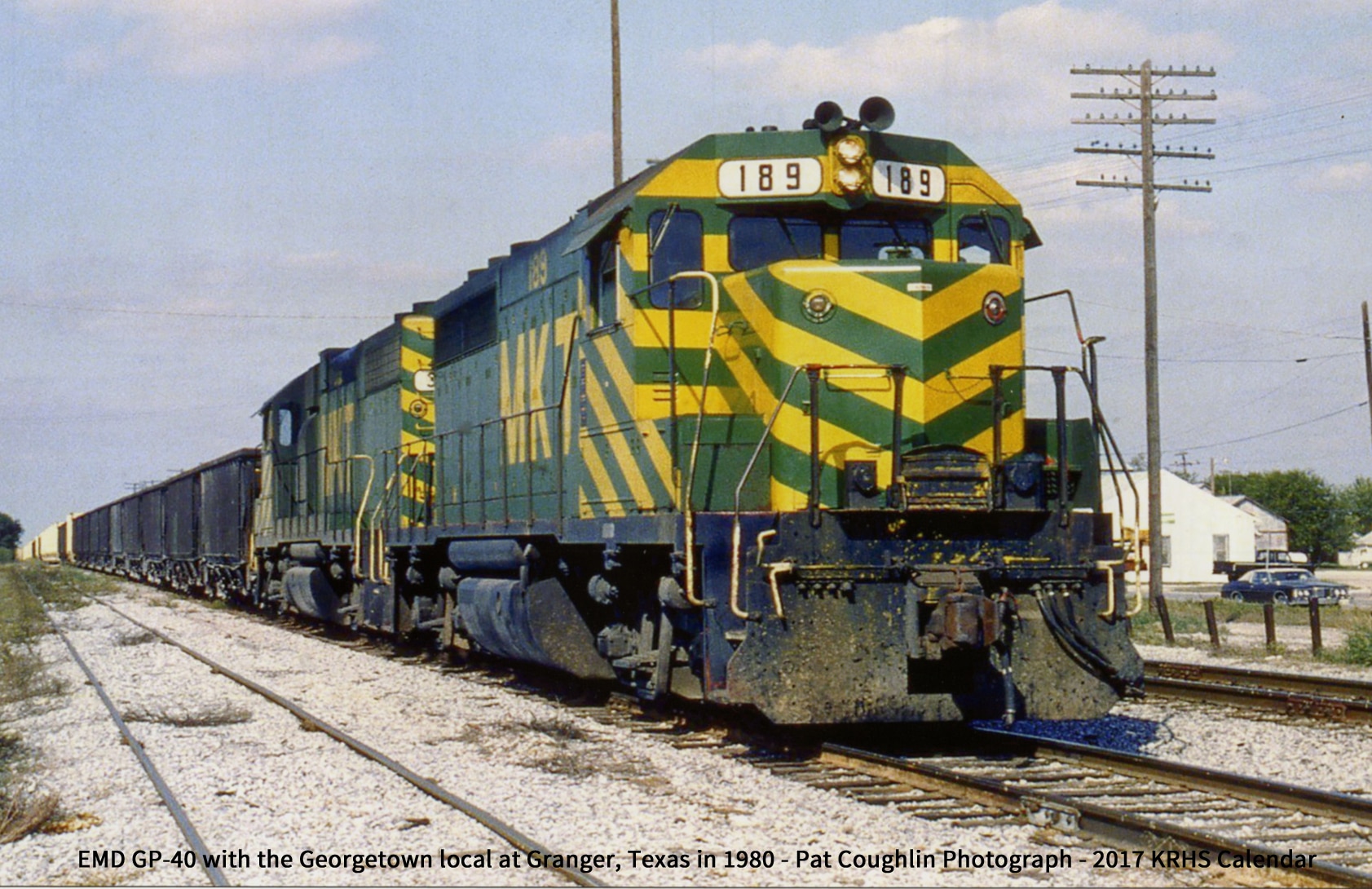 The Katy began phasing out the steam engine when General Motors / EMD A-B-B-A demonstrator set No. 291 made testing runs from Houston to St. Louis in 1946. After 10 days of rigorous testing the Katy placed their first diesel order for 6 Baldwin DS4-4-1000 switch engines. These would replace an aging steam switcher fleet in the Dallas yard. These units were numbered 1000 – 1005 and delivered in a solid gray paint scheme with an MKT herald on each side of the cab. The following year two more orders were placed, five GM / EMD NW2 switchers and five more Baldwin DS4-4-1000’s. These 1000 horsepower switchers would be used to further dieselize yard operations throughout the system. All would have black and white stripes added to the front hood and rear of the cab in an effort to make them more visible at grade crossings.

The first passenger units ordered would be the EMD E-7 units for the streamlined Texas Special train in March of 1947. These were painted Cardinal Red with silver lower side panels. The upper surface of the nose forward of the windshield was painted cream yellow and the red enameled steel M-K-T shield was placed on the sides of the new diesel locomotives. More passenger units were ordered from Alco in 1949, these were the 2000 hp Alco PA1 numbered 151A and 151C. These were painted with faded stripes to simulate the stainless steel corrugated sides on the streamlined Texas Special passenger cars. All covered wagon locomotive types would carry a similar paint scheme. Later GP-7 and other hood type freight locomotives had cream yellow safety stripes front and rear.The Katy would eventually order engines from all the major locomotive manufacturers, this created a nightmare for the Katy shop forces. All but a few engines would be rebuilt and re-engined from the frame up with EMD hoods and engines. Starting in 1957 with the railroad in dire financial straits William Derumas era began with the M-K-T shield and locomotive paint scheme changing. Locomotives were painted a slightly darker shade of red without the safety stripes, silver sides or cream yellow nose and a new gold herald with red KATY in the center. With the railroad close to bankruptcy John W. Barriger was elected to save the railroad. The classic M-K-T herald shape was brought back and the main color returned to red. The banner and palm leaves from the previous M-K-T herald returned with the KATY retained. With the railroad on the road back to financial health the Reginald N. Whitman era of John Deere green and yellow started in 1972 and remained until the 1988 merger with the Union Pacific.

This page was compiled from the Diesels of the M-K-T series by John Merman in the KRHS Katy Flyer. The issues are September and December in 1994; March, June and December in 1995 and March 1996. A complete diesel roster is available from the KRHS, Diesel Locomotives of the M-K-T 1946 – 1983: A Roster. Most pictures were scanned from back issues of the K.R.H.S calendars. Most back issues can be ordered online at the Katy Flyer Magazine and Katy Lines Calendar pages in the Publications menu. Ordering by mail is also available by printing out the mail order form on the Publications menu

Photos of later engines from different eras of the Katy Railroad can be found in the rotating slide show at the bottom of this page.

KRHS Katy Flyer Magazines and Calendars feature many rare and historic photographs of the Katy Railroad that are great for collecting and research. 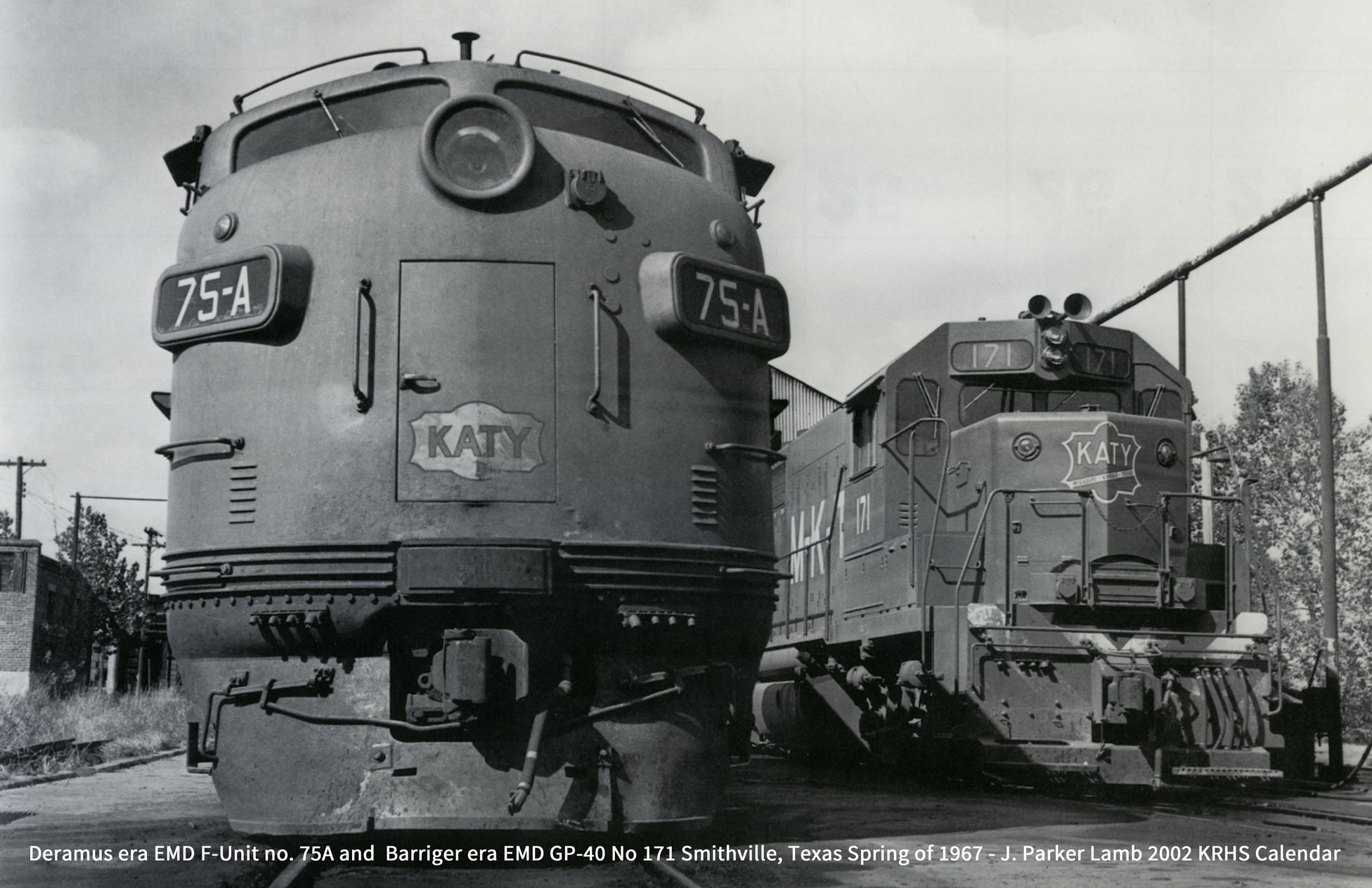 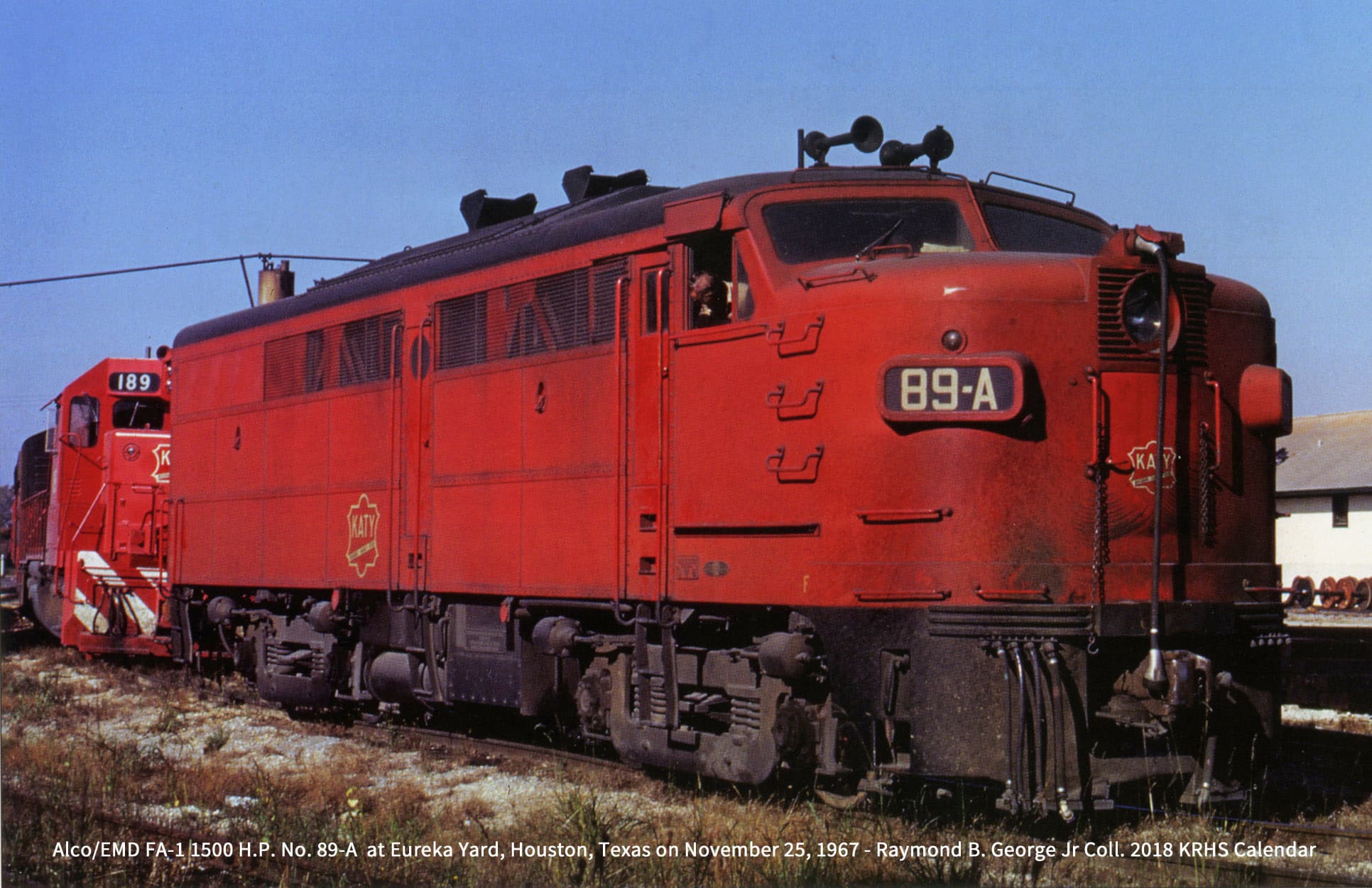 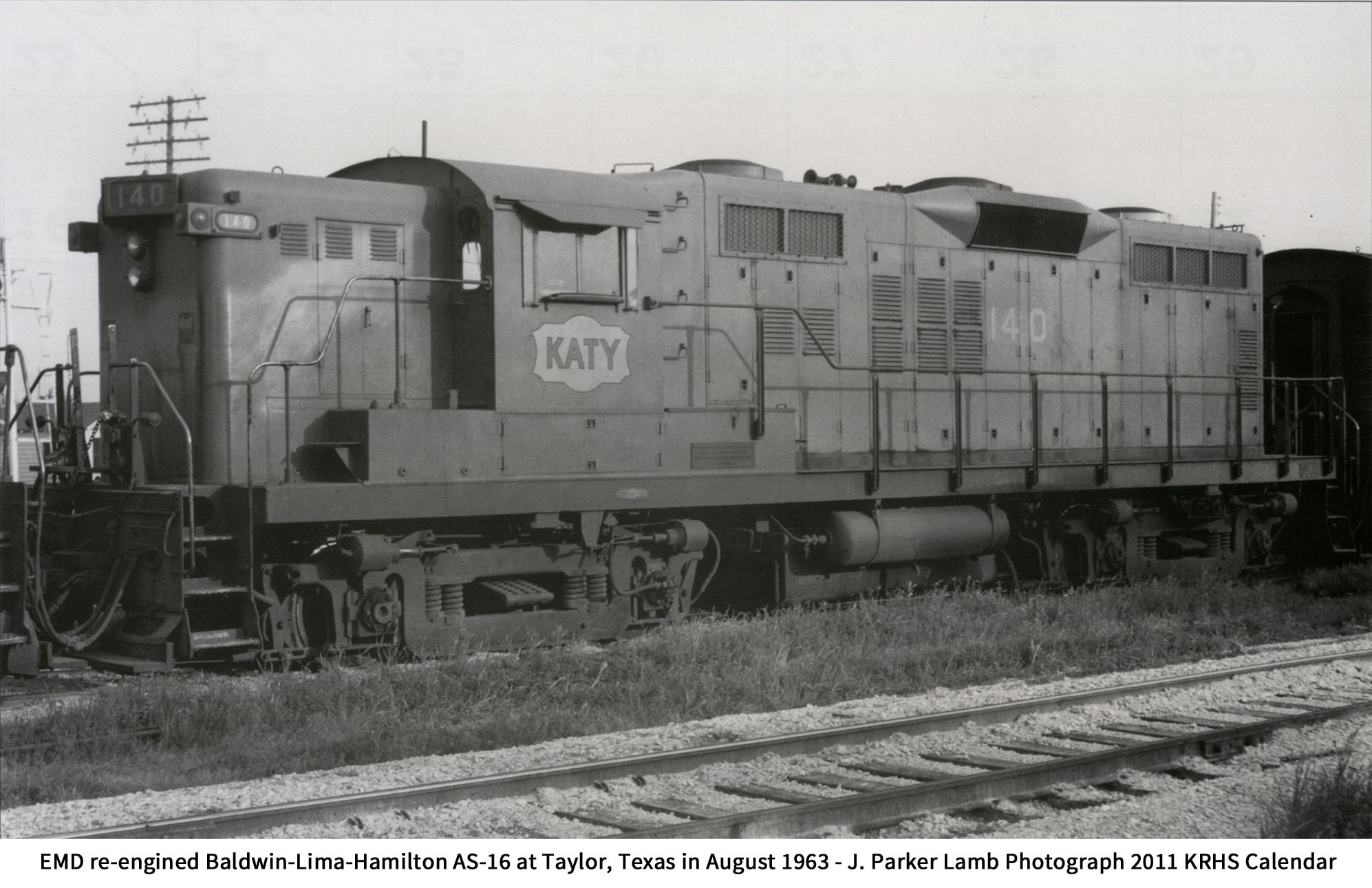 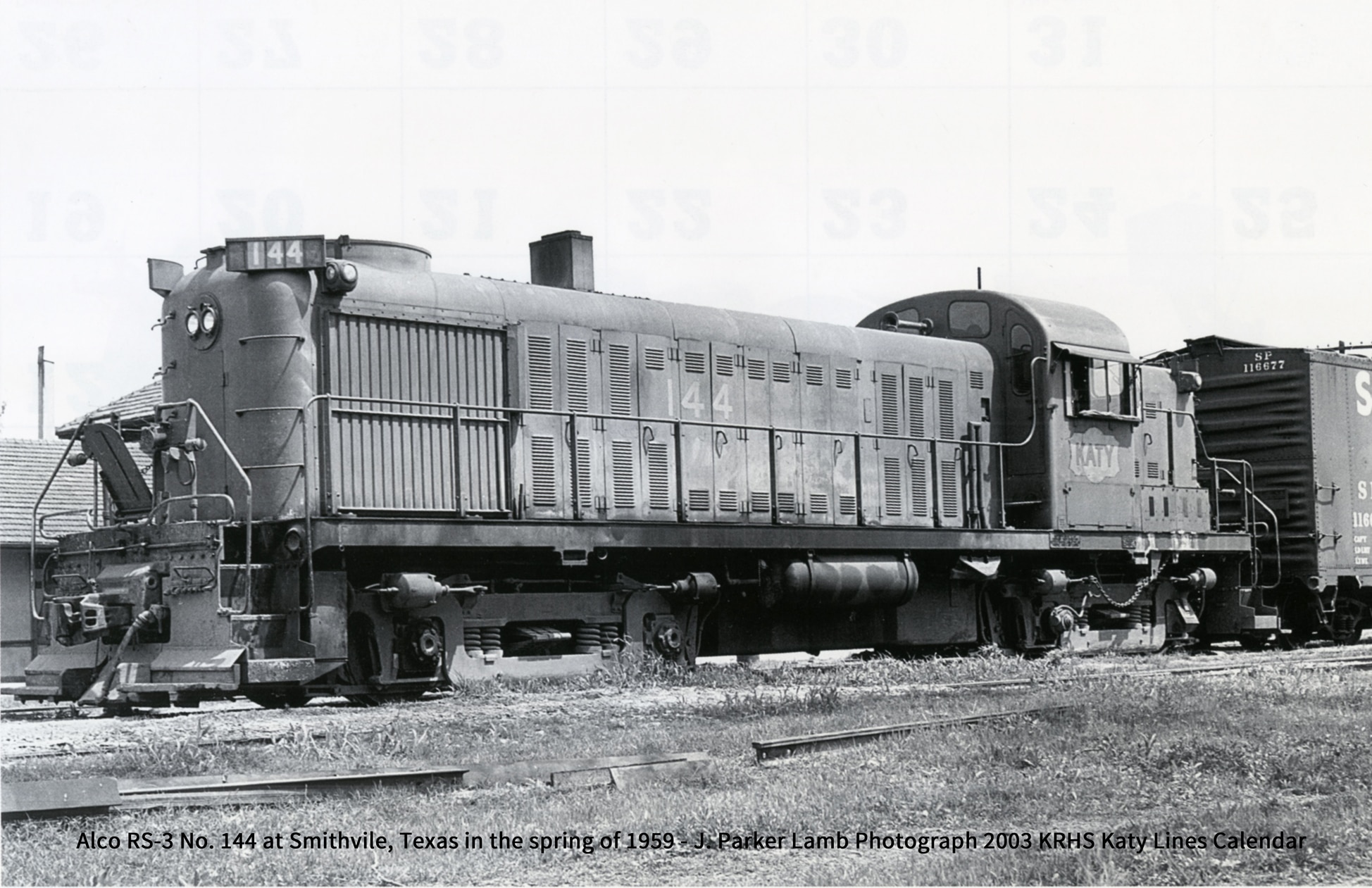 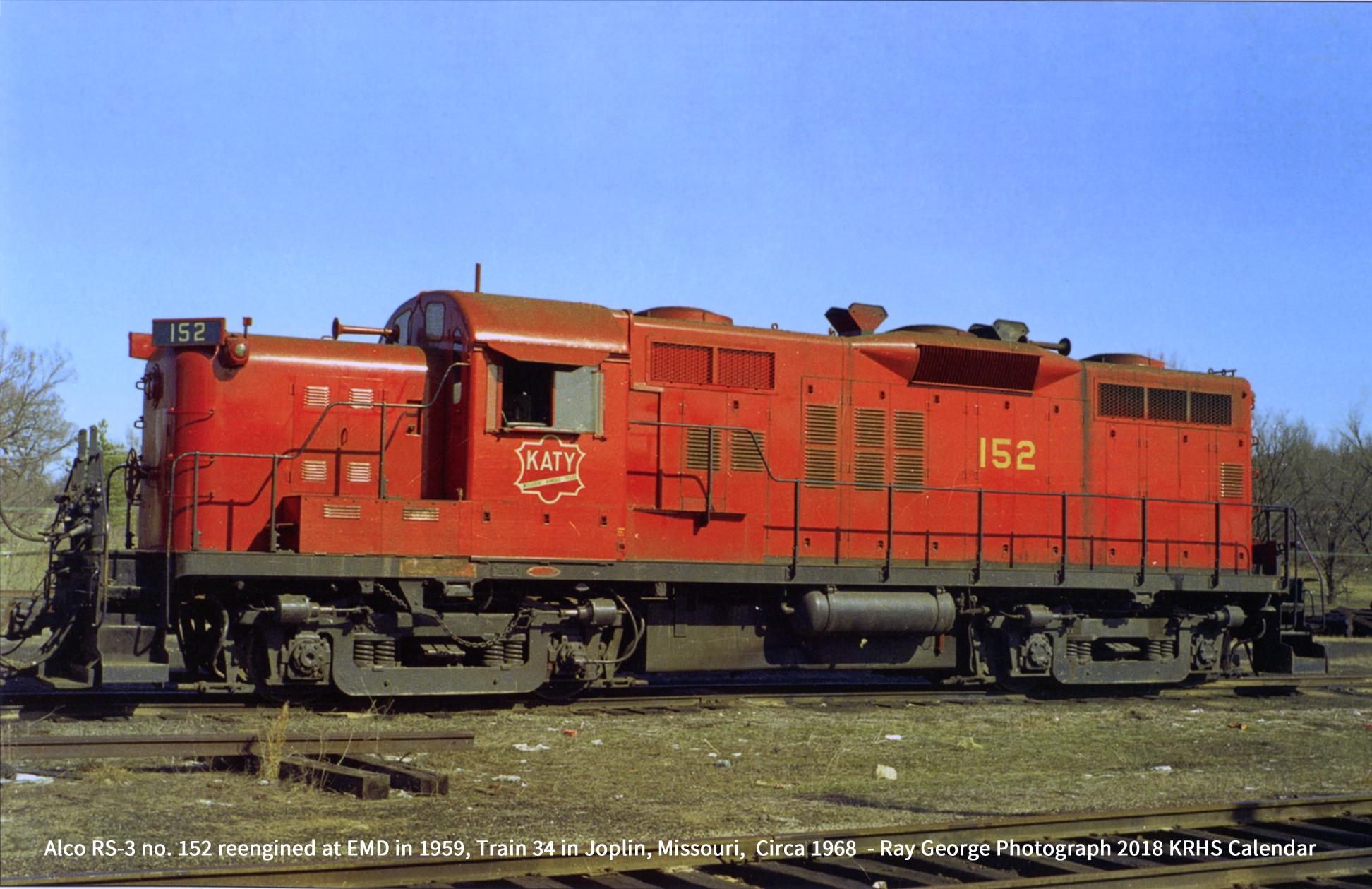 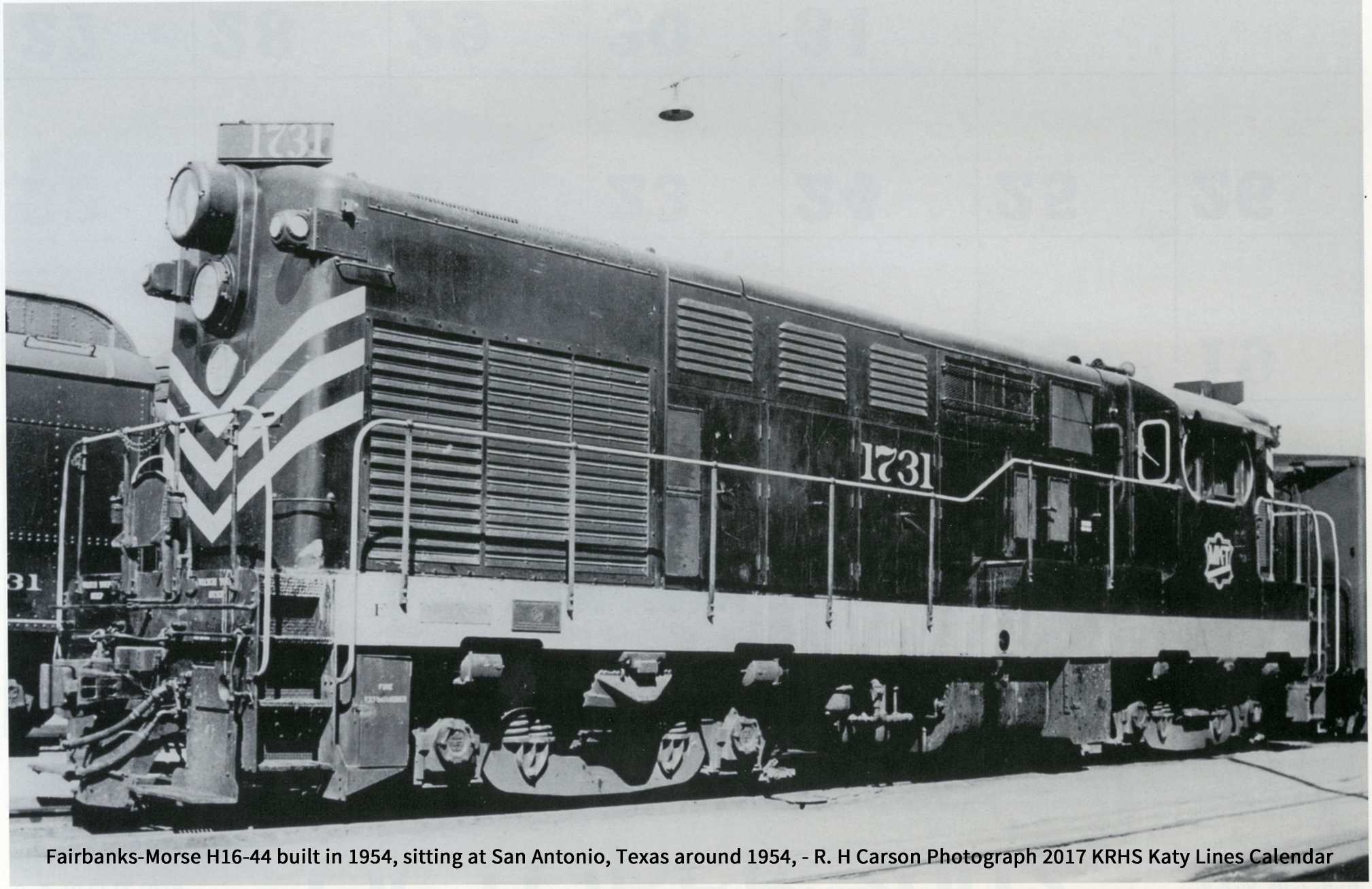 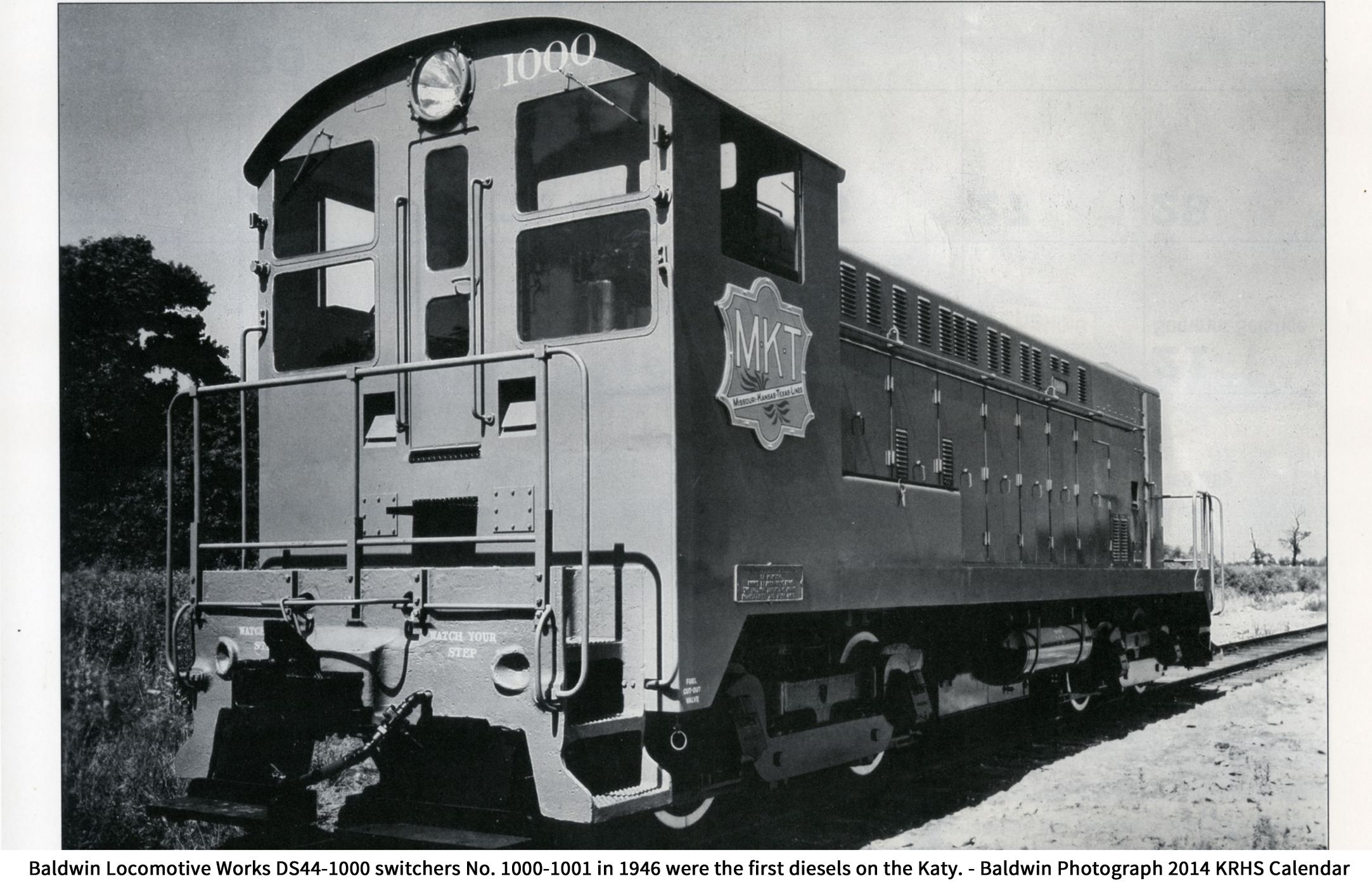 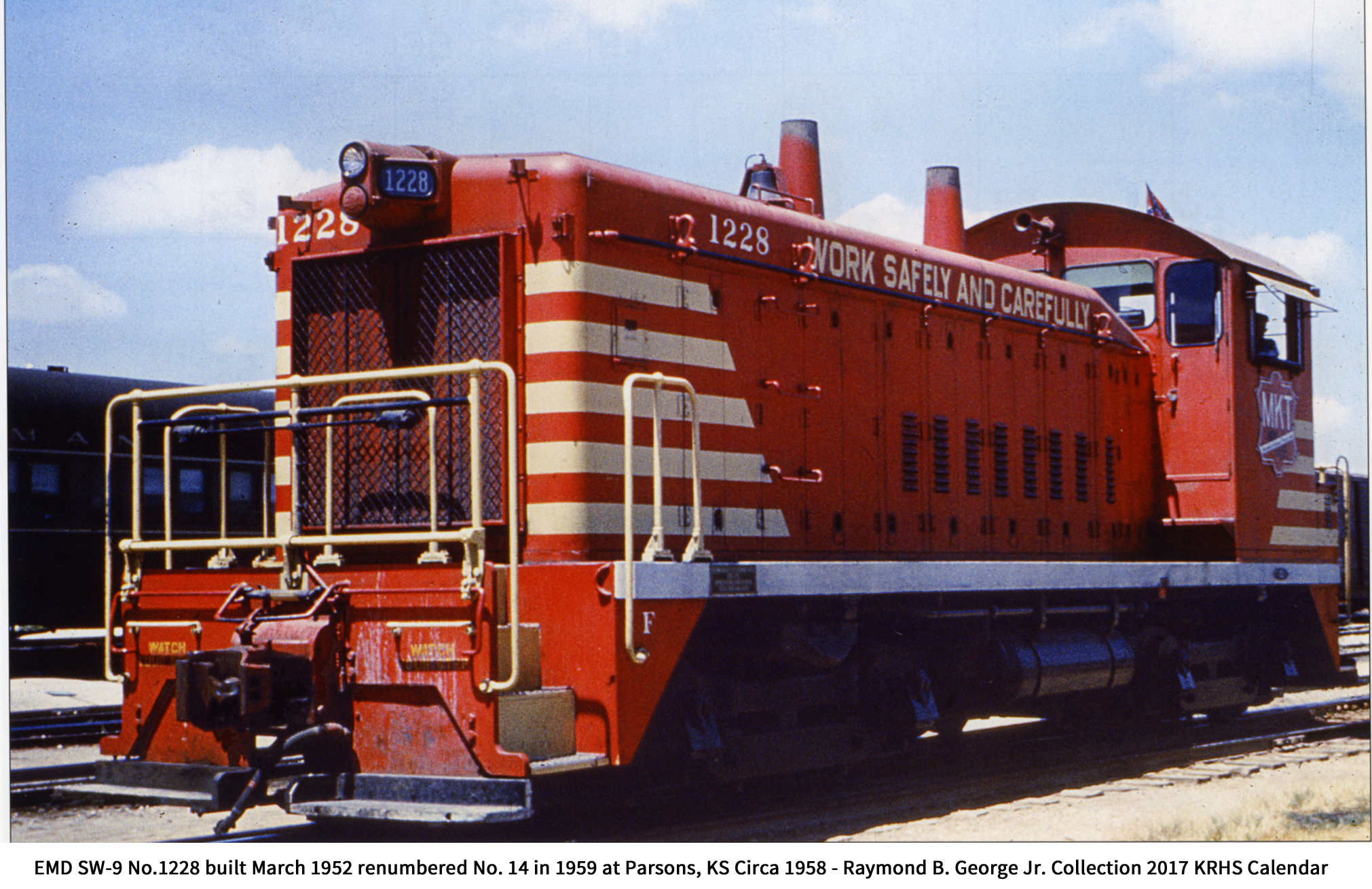