Q1: One of our family members worked for the Katy years ago. We are researching our family tree and wondered if your society has any Katy employment records.

Answer: We regret that few if any records have survived the years and merger with the Union Pacific Railroad. No employment records were donated to the KRHS by the railroad. Because of the lack of records, the society will be unable to help in most requests for information. However the Red River Railroad Museum in Denison does have a few seniority lists and a collection of M-K-T Employee Magazines. Many names of Katy employees are mentioned in these magazines.

A link to the Museum is below, also listed are many sites on the net that might be helpful in researching a loved one.

Q2: My family member was involved in a train wreck many years ago on the Katy. Does the KRHS have any information.

Answer: Unfortunately most records from the Katy were disposed at the time of the U.P. R.R. merger or lost over time. While none were donated to the KRHS, the internet can be used for research. The best source for this information is listed in the links below. The federal government sites listed may have detailed information on accident causes from the I.C.C. reports.

Q3: I am looking for back issues of the KRHS magazine, The Katy Flyer and the KRHS Calendars, are any available to purchase.

Answer: A printable order form with a list of available issues can be found on this website. A link is provided on the left side of this page under Katy Flyer Back Issues. Many other society Katy research publication are listed on the order form.

Q4: How were Katy steam engines painted and lettered during the steam era.

Answer: According to interviews with long time employees from a June 1927 “MK&T Employees Magazine”, and examining photographs from several books on the Katy. Some of the earliest steam engines on the Katy were dark maroon, with a large oval medallion on the side and back of the tender, with a field of Chinese vermillion and the letters M. K. & T. R. W. inside the oval and on the side of the engine cab, a one and one-half inch gold line on the outer edge and the number of the engine in the center of field in gold, black shaded and split on the rear of the tender. All passenger engines were finished with gold lettering and striping.

Steam locomotive livery was simplified after the infamous Jay Gould gained control of the railroad. Gould instructed shop personnel to paint all engines black and place the railroad initials M. K. & T. in about 12 inch letters on the side of the tender tank bordered by half inch striping. The engine number was placed on side of the crew cab, side of the sand dome, coping of the tender and back of tender.

After the courts dissolved Gould’s control of the Katy, painting and lettering of Katy steam engines was simplified even more with all lettering and numbers in white. The M. K. & T. moved to the side of the crew cab with the engine number below, some photos show the number above the road name. The engine number remained on the sand dome with much larger numerals on the tender side and rear.

Sometime before the 1923 reorganization the engine numbers on the crew cab were replaced with the engine classification. After 1923 the company name on the crew cab was changed to M-K-T and later during the middle to late 1930’s running boards and wheels on passenger engines were outlined in white paint.

In April of 1928 Katy Pacific number 387 became the first engine to have the large red and white M-K-T emblem on it’s tender resulting in the engine number being moved to the crew cab replacing the M-K-T. Katy Pacific number 404 was the second engine bearing the emblem, the employee magazine announcing the achievement stated that these first emblems were painted on the tender. Later emblems were enameled steel and attached to the tender sides with bolts, only passenger engines received the emblem at this time. The first freight and yard engines began receiving the emblem in 1938 or 1939.

Q5: Katy red on diesel engines are several shades of red and have different lettering, how can I tell which era they are from.

Answer: There are four distinct eras for diesel locomotive paint schemes, with some variations within each era.

The first is named for Matthew S. Sloan, President of the railroad from 1933 to 1945. Mr. Sloan presided over the railroad during the start of the diesel era and start of the decline of the steam engine. He is most remembered for the bright distinctive “Sloan Yellow” used on company equipment and structures during his tenure. The first EMD E7 diesel passenger engines and EMD F3 freight engines were ordered with a scheme of bright red bodies, silver side panels, and cream yellow on top of the nose hoods. M-K-T Heralds, engine numbers, and company lettering were different on each type but this is the easiest way to tell a Sloan era engine

Next is named for Katy President William N. Deramus III and covers 1957 till 1965. Mr Deramus came to the Katy from the Chicago Great Western Railroad, during this period Katy changed to a darker similar to what was used on the C&GW Railroad. The famous MKT herald was redesigned to a smaller and more plain design with red KATY lettering centered in a Dulux or gold leaf background with the herald and lettering outlined in black.

John W. Barriger III was appointed President of the Katy in May 1965. The original herald shape and color returned with the KATY retained and Missouri-Kansas-Texas spelled out in the banner. The red was slightly darker with a slight blue or purple hue. The red used during all eras seemed to fade rather quickly in the sun and road grime made it worse. A large M-K-T with small engine numbers above were painted with on each side of the long hood of the GP-7’s units. The new herald was placed under the cab windows of these units. Later GP-38 and 40’s had the engine numbers on the cab side with the new herald on the hood ends and white stripes on the pilots.

The final era covers all equipment painted in what is sometimes called John Deere green and yellow, or Whitman green and yellow. So named for Reginald N. Whitman who was appointed Katy President in 1970, this era lasted till the merger with the Union Pacific in 1987/88. Most engines had green bodies with yellow 45 degree safety striping on the cab and both front and rear ends.

Answer: Katy Red is hard to match due to how fast the sun faded the color. Most people use Floquil ATSF red for the early diesel eras, in the Barriger era Floquil Bright Caboose Red is real close. Again all the reds faded quickly and road grime changed the color ever more. Sloan Yellow on caboose and freight equipment seemed to have a cream or orange hue depending on which photo is used for comparison. Floquil Reffer Yellow straight from the bottle works if you don’t like a custom mix. I used DRGW Orange with a few drops of White, some suggest using Reffer Yellow with a few drops of White and Red. The late diesel era is the easiest as Floquil makes a Katy Green and Reffer Yellow is what most use for the later yellow.

Q7: What Year did the Katy start building the railroad and when was it merged into Union Pacific Railroad.

Answer:The Katy began life when chartered as the Union Pacific Southern Branch on February 13, 1865. The first constructing ceremony was on October 15, 1867 at Junction City, Kansas with actual work beginning in the year 1869 and reaching Council Grove, Kansas by October 27, 1869. Corporate life of the Katy ended on August 12, 1988 when the company was merged into the Missouri Pacific Railroad which is part of the Union Pacific Railroad Corporation.

Links to assist in Genealogy Research and reseaching Train Accidents 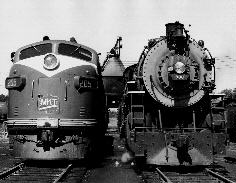 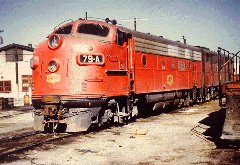